One thing I've come across in Mandarin that I don't recall striking often in English are words that have multiple meanings, and the meanings are the opposite of each other. They do exist in English, and are called Janus words or sometimes contronyms, antagonyms, or auto-antonyms.

An English example is the word "sanction". It can mean to give official permission or approval for (an action), but it can also mean to impose a penalty on. Another example is "seed". If you seed a lawn, you put seeds into it. If you seed a tomato, you remove the seeds from it. Others are less obvious like "trim" which could mean to add extras to the edge of something, or to remove them. But there aren't a lot of these.

In the main image above, you can see the Chinese word 借 (Jiè) and Google Translate shows the meaning as "borrow".

All good. But now check out the alternate meanings that Google provides: 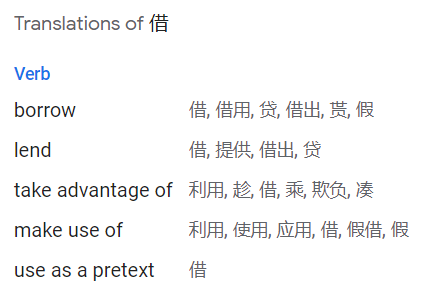 When I first came across this word, I had no idea how I'd know what was going on. But as always, context is everything.

Google says "You lend me a dollar". Now it's not really a dollar but the basic idea is there. A dollar would be more like 一美元 (yī měiyuán) for an American dollar, or 一澳元 (yī àoyuán) for an Australian dollar. kuài is sort of a "piece" and qián is "money". Here it would mean one Chinese Yuan or about 1/6th of a dollar.

Similarly, turning it around the other way is:

"I lend you a dollar". So that didn't do the trick. However:

"I borrowed one dollar from you".

从 (cóng) is essentially "from".