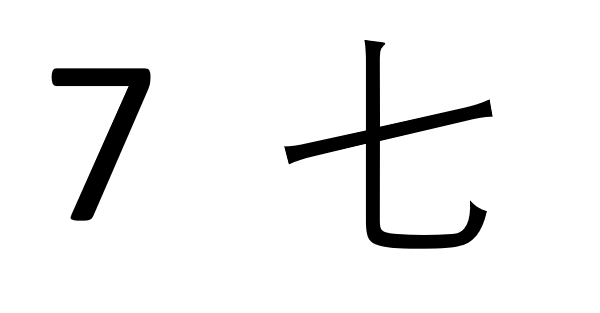 This is the eighth in a series of posts where I'm looking at how the Chinese view numbers, often from a superstitious basis.

The Chinese character for seven (Qī) is shown on the right hand side of the main image above.

The number seven is a bit of a mixed bag, in terms of positive and negative feelings.

Seven is considered good for relationships, particularly because it sounds like 起 (Qǐ) which means "to get up". It also sounds like 气 (Qì) which can mean just something like "gas" but it often means "spirit" or "vital energy".

On the downside, it also sounds like 欺 (Qī) which is a word for bullying, cheating, or swindling someone. In Cantonese, the word chāt sound like the word chat which is often used for "penis".

Again on the positive side, the 七夕节 (Qīxì jié) festival is a bit like a Chinese Valentine's day, yet again on the negative side, the seventh month is the one that Chinese believes has ghosts and spirits rising from hell. There is even a ghost festival.