If you've heard about Chinese currency at all, you might have also heard it called several different names. That's not surprising as we do the same with our money. While I might talk about the dollar (Australian, US, or other), and I might say "that's 10 dollars", I'm more likely to say "that's ten bucks". The same happens with Chinese currency, with the added complication that it has both Chinese names, and names that are used when referring to it in English.

Formally, the main unit of Chinese currency is the 人民币 (Rénmínbì).

The word 民 (Mín) is a bit like a member of an ethnic group but it makes the first two words mean more like "the people".

The word 币 (Bì) is basically a word for "currency".

So this makes the whole term mean "the people's currency". It's often referred to in English as the RMB. So, it's a bit like how we would refer to "the Australian Dollar" as a currency.

In Chinese though, when referring to an amount of the currency, the formal term used is 元 (Yuán). It's a paper note as shown above but was originally a coin as shown here: 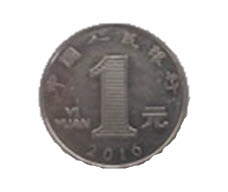 You can see it written on the coin to the right of the one. For us, this is closer to the term "dollar". So when a price is 13 of these, the words would be 十三元 (Shísān yuan) where 十三 (Shísān) is the number 13.

This name is also used in the financial markets at time, where they will refer to CNY (Chinese Yuan). I suppose they're following  a pattern like USD, AUD, etc. and RMB doesn't fit the pattern with the country name in the first two letters.

Note: Chinese doesn't have singular and plural words for this like we do.

And just like we might say "13 bucks" instead of "13 dollars", the Chinese routinely say 十三块 (Shísān kuài) where 块 (Kuài) is a less formal term for 元 (Yuán). In other usage, 块 (Kuài) is closer to "piece" or "pieces".

What about smaller amounts?

Chinese does have terms used for smaller amounts as well:

分 (Fēn) can mean 1/100th but the value is so small as to be basically useless. I've never heard a person use this word in this way. They more often use it as part of a percentage i.e. 百分之百 (Bǎifēnzhībǎi) means "100%".