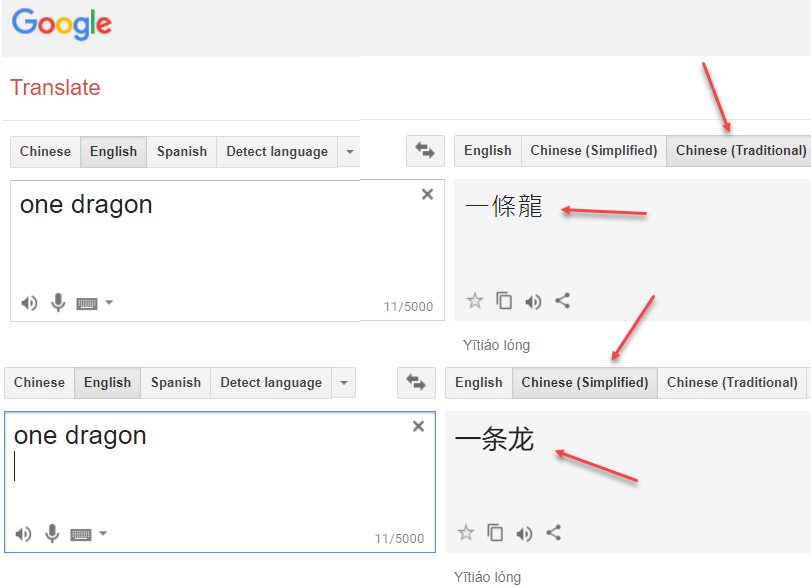 In a recent post, I talked about the benefits I'd gained by learning to read Chinese, or at least getting better at it.

A curious question that I get from people sometimes, is about "learning to read Mandarin". I have to explain that Mandarin is a dialect (as is Cantonese) not a written language. I'll write more about dialects another time.

One of the upsides of learning to read Chinese nowadays is that it doesn't matter so much what dialect someone speaks, the written form is pretty much the same, well almost…

One of the challenges for people learning to read and write though was that some characters were pretty complicated. That might be ok if they are uncommon, but not if they are used regularly.

To improve literacy, starting in around 1946, the Chinese government decided to make some of them easier. A few hundred common characters were simplified as 简化字 (or jiǎnhuàzì). These are often also called 简体字 (or jiǎntǐzì).

Let's look at a couple of simple examples:

In English, we have collective words for groups of things ie: flock of geese, or pack of wolves. Chinese, however, has measure words (量词 or liàngcí). So to say "three fish", you say 三条鱼 (or sāntiáo yú). In this case, tiáo is the measure word for fish (actually it's used for many long thin things).

There are many, many measure words, but the most common generic measure word is gè. So if I said "I have a secret", I'd say 我有一个秘密 (or Wǒ yǒu yīgè mìmì). In that sentence, the character 个 (or gè) is the measure word.

But notice how this sentence looks in Traditional Chinese:

Look at how far more complex the fourth character is. Same sentence but one different character.

As another example, let's look at another long-thin thing that uses tiáo as its measure word:

If I say "one dragon", it's 一条龙 (or Yītiáo lóng) in simplified Chinese but in traditional characters, it's 一條龍.

You can see why they wanted to make the change. You might also wonder about why they'd simplify a word like "dragon" when choosing common words to simplify, but dragons are surprisingly prevalent in Chinese culture.

Anyway, nothing is ever all that simple. Now that we've discussed what they are, in a later post, I'll discuss who does/doesn't use them.