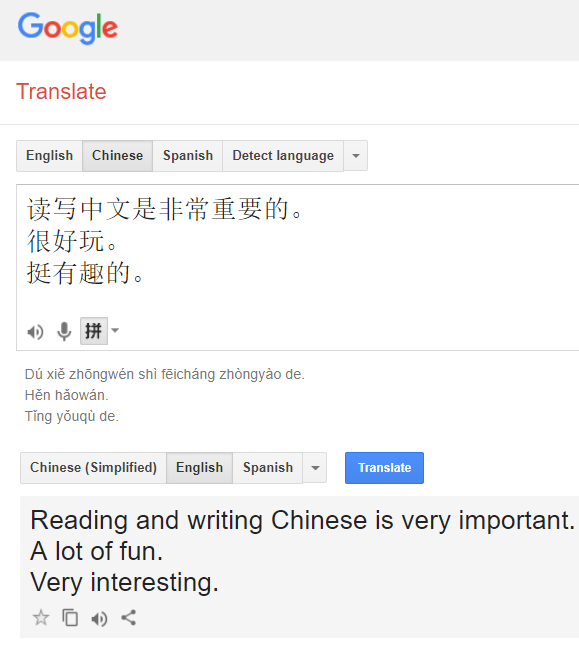 I have a lot of Asian friends, and one thing that's always surprised me is the number who can speak, but who cannot read or write. They are perfectly fluent speakers of their language, as they learned to speak from their parents and families, but they never learned to read and write.

So when I decided to learn to speak Mandarin Chinese, I was wondering if I should spend the extra effort to learn to read and write.

I'm really glad that I decided to learn.

Before I started to learn, I hadn't realized that even though there are many dialects of Chinese (over 900 and I'll talk about them more another day), that they pretty much all use the same writing system. They have different words in the different dialects but they typically have the same character with the same meaning. (Note: There are some exceptions to this like Simplified vs Traditional characters which I'll also talk more about another day).

This means that learning to read Chinese characters (Hanzi) is even more valuable than you might have realized.

This is a character that means "fire". In Mandarin, it's pretty much pronounced somewhat like "haw". In Pin Yin (which is basically used to write the Chinese characters in our alphabet), it's written as Huǒ. The symbol over the "o" is indicating that the character is pronounced with the 3rd tone (a falling then rising tone).

You'll also notice that this pictograph does somewhat show fire. Not all characters are literal drawings like this though. Importantly, if you were speaking another dialect, you would still recognize it as "fire".

A Cantonese speaker would call this fo and pronounce it somewhat like "fore". Rather than using strokes to indicate the tone, it might be written as fo2 with the 2 indicating the second tone. (Tones are different in the different dialects too).

At high school (many, many years ago), I spent 5 years learning Japanese. Later in life I spent some periods working in Japan. While I could cope with basic greetings, and getting around town, I always was hampered by my inability to read anything complicated. I knew my Hiragana, Katakana, and could use Romaji, but I didn't know enough Kanji characters to get by. Kanji characters are derived from Chinese characters, and are often the same.

A big surprise for me when I've been learning to read Chinese was that I can now look at a large number of Japanese signs and know what they mean. I haven't got the slightest idea what the word is in Japanese, but I can often understand the signs.

As an example, for the word fire above, Japanese basically uses the same character. They call it ka though.