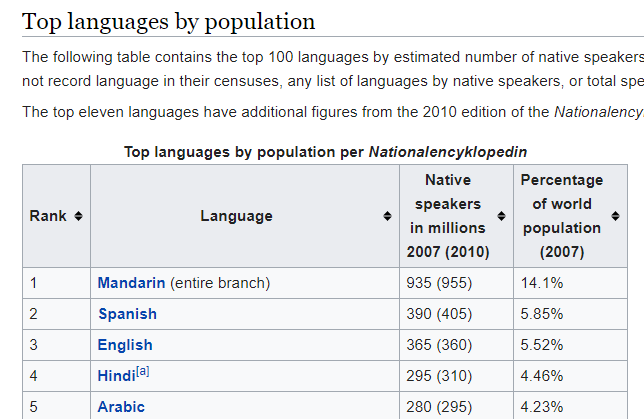 Anyone that knows me well will have heard me talking at some time over the last few years, about learning Mandarin. At a SQL conference the other day, I had a few people asking me about it because they were interested in learning about it, and a couple wondering why I'd learn it in the first place.

The first reason for this is how prevalent the language already is and how much more prevalent it will be.

I often see statistics that talk about the most common languages in the world, and invariably they count how many countries speak the language. English fares well in those comparisons.

But if you look at the number of native speakers of the different languages, it's quite a different story, particularly when projected forward.

A few years back, I was reading a Spanish airline (Iberia) magazine with an article on language trends and it was quite revealing. They argued that by 2025, when you rank languages by the number of native speakers, it'll look like this:

The aspect that I hadn't considered was birth rates. They argued that 1 in 4 children born will be native Mandarin.

Just stop and think about that for a moment.

And 1 in 5 will be native Spanish speakers. (This is in no short part caused by the large number of large Catholic Spanish-speaking families in South America where some people are still having 8 or 10 children. In many English speaking countries, the native English speakers aren't even replacing themselves – with 1.3 or 1.4 children per couple).

Now many people will say "oh but there are lots of Chinese dialects". That's true. In fact there are over 900 well-recognized dialects of Chinese. What's important to understand though is that the Chinese government is big on standardization. They even have a single timezone right across the huge country, but you have to do that when you have so many people.

As hard as it is for less common dialect speakers to deal with, the game is over and down the track, it's all Mandarin.

Cantonese is the next most common, and is still the dominant language in Hong Kong. I'm sure it's hard for them to accept but right from the moment Hong Kong was handed back to China, the writing has been on the wall for the language. Children there learn Mandarin from a very young age, and I'm sure over time, that if they want to deal with government, business, etc. it will be Mandarin.

Even here in Melbourne, when I'm on trains, I used to hear mostly Cantonese. Now almost all I hear is Mandarin.

The positive thing here is that the different dialects share a common writing system (with some differences that I'll describe another day).

By the numbers, I've also seen projections that say that if you could speak Mandarin, Spanish, and English, by then you'd be able to communicate at some level with over 90% of the world.

I'll write more next week on methods for learning. If you want to get a taste for it in the meantime though, my current favorite is Tutor Ming. If you decide to try it, click here and it's a bit cheaper for you, and for me.

One argument is that technology will replace the need for learning languages. I don't think that's the case, and I'll discuss that further later too.